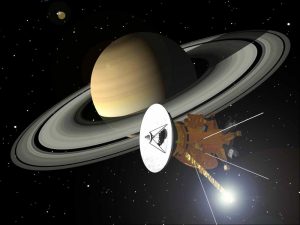 At 12:55 BST today, NASA’s Cassini probe transmitted its final signal to Earth before plunging into the atmosphere of Saturn. It’s the end of an incredibly exciting and important mission.

Back in 2004, when Cassini first arrived at Saturn after a seven-year voyage, I translated some educational material for the European Space Agency (ESA), which used the Cassini-Huygens mission as a focal point to teach school children about the solar system. Since then, as well as inspiring children and adults around the world, the mission has generated a wealth of data about the Saturn system. It has ventured into the previously unexplored space between the planet and its rings and successfully landed the Huygens module on the surface of Saturn’s largest moon, Titan – the first landing ever achieved in the outer solar system.

A glance at social media shows that I’m not the only one feeling a little emotional about Cassini’s final moments.

The probe was commanded to destroy itself by diving into Saturn’s atmosphere to avoid the risk of contaminating any of the planet’s moons which could have the potential to harbour microbial life.