As I write, the winners of all but one of the 2017 Nobel Prizes have been announced.

The Nobel Prize in Physics 2017 will be presented to Rainer Weiss, Barry C. Barish and Kip S. Thorne “for decisive contributions to the LIGO detector and the observation of gravitational waves”. The first direct detection of a gravitational wave in September 2015 was a landmark event, confirming Albert Einstein’s theory of general relativity and launching the field of gravitational-wave astronomy. Read the official news items from MIT and Caltech. 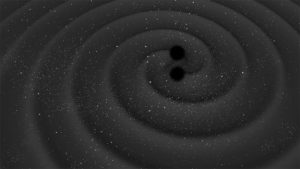 The merging of two black holes produces a ripple in the fabric of spacetime known as a gravitational wave. Source: ESA – C. Carreau

The Nobel Prize for Chemistry 2017 has been awarded to Jacques Dubochet, Joachim Frank and Richard Henderson for the development of cryo-electron microscopy for the high-resolution structure determination of biomolecules in solution. Cryo-electron microscopy is a revolutionary technique in biochemistry which allows researchers to produce detailed three-dimensional structures of biomolecules. To find out why this is so significant, read the official press release here.

The Nobel Prize 2017 in Physiology or Medicine has been awarded to Jeffrey C. Hall, Michael Rosbash and Michael W. Young for their discoveries of molecular mechanisms controlling the circadian rhythm. Although scientists have known for a long time that plants, animals and humans have an internal biological clock that anticipates and adapts to daily changes in the environment, the three Nobel laureates have now explained how this works at a molecular level. Read the full details about these discoveries and the winners here.

Of the winners in these categories, both Rainer Weiss (professor emeritus of physics at MIT) and Joachim Frank (professor of biological sciences at Columbia University) were born in Germany.

Although the Nobel Prizes honour individuals, scientific discovery today is always a team effort, involving hundreds or even thousands of individuals. Rainer Weiss acknowledged this by saying: “The discovery has been the work of a large number of people, many of whom played crucial roles. I view receiving this [award] as sort of a symbol of the various other people who have worked on this.”